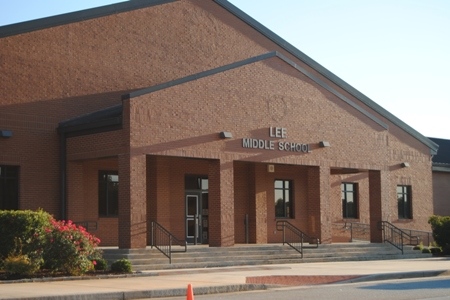 Dr. Robert Lee was honored by a crowd of about 350 teachers, school officials, parents and prospective students during Lee Middle School's dedication and ribbon cutting held in his honor Monday evening.

Current Coweta County Board of Education chairman Mitch Powell led the act of dedication in which all present recited the responsive reading in unison. The dedication was followed by a ribbon cutting that officially deemed the location as Lee Middle School.

Lee served as superintendent of Coweta County schools for 20 years, from 1969 to 1989. Board of education member Brian Roy described Lee's many accomplishments. During his service, Lee oversaw many changes in the local schools. He presided over consolidation of the city and county school systems in 1968 and guided the full integration of schools in the county in 1970. He also helped to bring the system into accreditation under the Southern Association of Colleges and Schools, SACS.

One of his most memorable accomplishments is assisting with the formation of middle schools in the county in 1988. Previously, schools had a variety of grade levels found at different schools. Lee and his administration reorganized the grade structure into the current levels: kindergarten through five, six through eight, and nine through 12.

Lee also worked to move the system's central office to Savannah Street and helped to secure the system's 237 Jackson St. office. In addition, he led the schools during a time of rapid growth in the beginning in 1980 when the system grew beyond 10,000 students.

While Lee was superintendent, the $15 million bond referendum that assisted with system expansion and funded the building of White Oak Elementary and East Coweta High School was approved by voters. "I believe it would have been catastrophic had it not passed," Lee said during his address to the audience.

He spoke of current growth in the system. "The greatest satisfaction a superintendent can feel is to see the school system continue to grow and see the lives of students improve," he said. "I was pleasantly surprised to see that the school board had voted to name a school in my honor," he said. "I am thankful, and I appreciate all of you being here."

Lee spoke of how the description of a principal has changed over the years. When he served as principal, he was classified as a teaching principal because he had to teach three classes, coach the girls and boys teams, keep all financial and discipline records, and be responsible for fundraising, among other duties.

He considers the formation of middle schools to play a major part in his career as superintendent. "For this reason I am very happy that it was a middle school that was named in my honor," he said.
He and his staff were able to raise enough funds to build Evans Middle School, which was the first school built in the county since the 1950s.

Bobby Welch, who served as associate superintendent during Lee's administration, was present at the ceremony. Also present were several people who worked closely with Lee during his service as superintendent. They included Sarah Nelms, Barbara Brown and Robin Miller. County Commissioner Paul Poole was also in attendance.
Principal Bob Heaberlin addressed the eager crowd of parents and students. "I have the privilege of being the principal at the new Lee Middle School," he said.

Welcome to the SchoolBlocks
self-guided tour!

The most common question we receive is, how is SchoolBlocks inspired by Pinterest? SchoolBlocks eliminates navigation bars and uses a block style layout that’s similar to Pinterest. It creates a unique and engaging browsing experience, optimizes for mobile and removes a lot of navigational complexity.

Please click on the red plus signs found on this page to learn more about specific features.